Click the icon for a change of contrast in the page style:

This is how the standard text on the page will be seen. 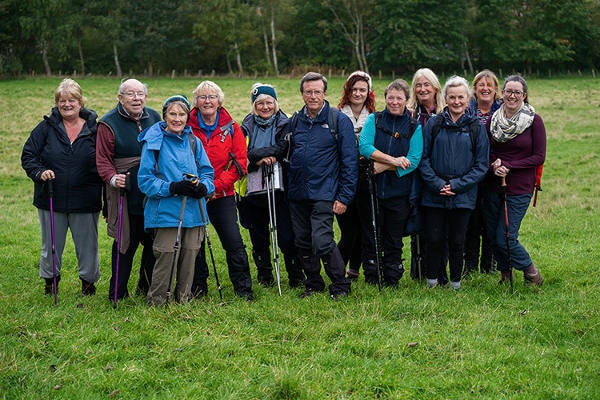 On Saturday October 5th 2019 a group of 13 walkers set off on the first Flash Fiction walk. Our expert for the day was local author, Sarah Davy.

The route took in a lot of interesting sites, including St Cuthbert’s Well, Hesleyside Hall, an ancient Romano-British settlement, beautiful woods, long views from the fell tops and much more.

Sarah gave helpful prompts to set our minds working and, when we returned to the Carriages Tearoom later, the pencils came out and people set to with enthusiasm. All sorts of things we had seen and heard came into play.

I hurried with anticipation of the meeting below.

Passing through valleys and down hills. Catching glimpses of old settlements, bastles and oak trees.

Laughing at the antics of the calves and sheep in the fields.

Going faster and faster, like the bygone trains, clickity clacketing on the now disused tracks.

Then, she comes into view, my sister river, and as we meet, we become one - the Tyne.

The land was wild and empty. Only the river rippled through the silence.

Cuthbert paused. The road had been long and tiring. But some had listened.

The path ahead looked steep and rocky while the spring at his feet offered cool, welcoming relief. He cupped his hands and drank.

Nearby the river was sliding past, like time, smooth and relentless. He looked downstream where thin mists clouded the view of men and women dressed in skins and furs building shelters of wood behind rough stone ramparts. The light of his God could not clear the mist.

Turning to gaze upstream, it was clearer. Loud men with steel bonnets sat astride small stocky ponies cursed and screamed as they drove stolen cattle into their fields and byres.

Beyond there, so much further upstream, a thousand men dug and carried tons of earth into the river to control and tame its waters. "Fools" thought Cuthbert "They can never dam time. Only my God is eternal"

He looked again at the path ahead. So much to teach, so far to go. But the path led uphill, strewn with doubt and danger, and he felt the weight of his years. He sighed and began the climb.

As Cuthbert reached the top, the smell of the sea and the sound of waves on island rocks drifted on the wind. "Am I so near the end?" he wondered.

He turned to look back on the way he had come. Still the river moved flowed past, but rising on the hill where he had stopped to drink was a church of stone, solid, built to endure.

He turned back to the path. It looked easier now. He knew his God was with him.

Her journey took her north and west, towards the border. Along the course of the river, but against its flow.

Could she be seen – she was visible from all sides as she made her way through the valley. She needed height, to be the observer and not the observed. Upwards she went, away from the unrelenting surge of the black water.

Taking notice of the signs of change; changing seasons, changing weather. The clouds were gathering to the east, a storm brewing. The oaks were holding on to their green leaves, but the chestnuts had already succumbed to autumn, displaying the yellows and browns of surrender. The cows were restless, looking for a space to lie in the coming wind and rain. The light was fading, already the hours of darkness outweighed the hours of light.

Was there shelter? A railway cutting following the sweep of the hillside, a derelict house, an ancient settlement. She would be fine.

Over the brow of the hill, her journey's end came in to view, a patch of sunlight illuminating the border ridge. Her path was suddenly clear, It was possible.

He walked along the riverside path, hardly noticing his surroundings. “Walking and fresh air will help” said the doctor, so, obedient to authority, he walked. Every morning he walked the short distance from the village along the path and back through the shops to his home. How could anything help the void inside?

He hardly noticed the little garden by the path. It was full of flowers and obviously well-tended.

Nothing would bring her back. The sky might be blue but it did not cheer him. What was the point of going on? At times he looked at the deep, dark waters of the Tyne and wondered if he should jump in. End it all? She would not have approved.

Sometimes a woman was tending the garden, but he kept his head down, avoiding eye contact.

One morning, he tripped as he passed the garden. As he scrambled to his feet, he heard her concerned voice, “Are you all right?”. “Yes, I’m fine” he mumbled and kept walking.

The next day, she said “Good morning, nice day for a walk” and he managed to reply and to look at her. She was sun and wind-beaten, an older woman who looked as if she had weathered a few storms in her life. He wondered why he did not know who she was.

As the days and weeks went by, he began to hope she would be there. Their conversation was brief, but gradually lengthened. One day she offered him a brown paper bag. “I made scones this morning and thought you might like to share them. There are too many for me”. He was secretly grateful, but sad. Home made scones were a thing of the past in his kitchen. His wife had been a good baker.

Spring became summer; then autumn arrived. The flowers changed with the season: summer annuals were lifted and polyanthus and pansies planted for the winter. He offered a bag of daffodil bulbs, “these will be cheerful in the Spring”. He knew he was fitter. He walked farther and enjoyed watching the birds by the river.

One week she was missing and the next. He was worried. He did not even know her name. After a month she returned. “How are you?”, he asked, with anxiety in his voice.
“I’ve had pneumonia, but I’m on the mend,” she said cheerfully. “The doctor says that fresh air and gentle exercise are what I need.”

Before he had time to think, he heard himself say, “Perhaps you would like to walk with me?”

“We’ll meet at midnight,” he says as we stare at the temple on the hill and drink from the well.

“Cuthbert will be with us on our journey.”

The slow-moving deep water of the river keeps us together to the village then we go our separate ways to prepare for the task ahead.

Carrying our father to his final resting place, granting his last wish is dangerous. His six children will prepare his body. Leaving on our journey before the cockerel crows will avoid the anguish and opposition of scores in the village. They want their village elder to stay in the sacred burial chamber to watch over them.

A hearty meal of lamb and potatoes swallowed down with mead, my final supper.

Edmund, the cobbler and a good family friend, gives me some soft leather boots for the journey.

It’s midnight and six of us climb the hill without moonlight to the temple. Heads bowed and covered. We are silent, contemplating the task ahead. My father’s body is wrapped in clean linen and is lying on the altar under dim candlelight. His simple wooden coffin stands at his side. Soon we will carry him down to the river path away from the sunrise.

In the heat of the day the stench of decay begins to seep through the boards as we lift him closer to our bodies.

We move as one to the river crossing. The waiting boat carries him over as we guide it through the deep water. Cursing the slippery footing, we emerge from the river drenched and cold to climb to the old deserted village. All around us the land is warm and gentle, soft with birdsong and sweet from blackthorn. The sun is setting. A perfect place to rest his bones. We place him in his native soil with Cuthbert’s blessing.

The Festival Welcomes Support from...

Please click on the advert to find out more. 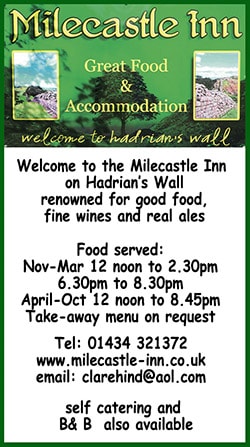 To Advertise on this site...

We welcome the support of advertisements on our site, particularly from local businesses. If you would be interested and like to find out more, please see our advertisers page.

Please click on the advert to find out more.